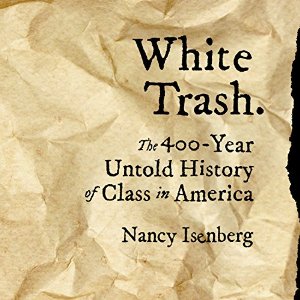 I picked this book up on a suggestion. It’s new. Like brand spanking new. I’m generally distrustful of new books. They’re untested. The best books stand the test of time, and by function of the laws of time and space, a new book has not been afforded the opportunity for significant survival.

The 2nd hesitation I had before starting this is, quite frankly, it’s a book specifically about white perspective. That’s a dangerous perspective to undertake in modern society. Looking into a few superficial reviews of the book before I got started and certainly I came across the judgments of this being a racist writing. The assertion being that anything which sheds light on historical white poverty is inappropriate given the context of African and Chinese slavery and the genocide of Native Americans. I wondered if maybe I had accidentally bought a racist book.

However, since I am man who is not afraid to read books he disagrees with, I decided to consume the content under the threat of reading something inappropriate.

Either Nancy Isenberg is not, as some critics suggest her to be, a racist who is producing some sort of #AllLivesMatter argument, or I am smart enough to read a historical account of something from a racist and not be poisoned by the underlying agenda. Long story short, I do not feel the critics of the white perspective were being rational.

I do not feel somehow racially emboldened by a story of white poverty in America. If anything, I feel I now have a better understanding of just how fucking racist the white settlers and founders of the United States actually were.

Through the telling of how the most depraved and desperate British citizens (including children) where selected for deportation to the New World as indentured servants, planted as nothing more than hands to perpetually work on farms, Isenberg rips off the rose-tinted shades we are adorned with by our American public school education and Disney Movie retellings of our past.  Isenberg tells how the most unproductive members of American society (which was literally and intentionally infected with unproductive people shipped here from Britain) formed a troublesome, backwoods, argued-to-be not-entirely-human class of ultra-poor white people who lived more as animals than humans. Every American knows that Australia was settled as a prison colony for Great Britain. For some strange reason the fact that America was done in much the same way escapes our high school history books. The average human didn’t initially come here for opportunity, it was a punishment for a crime as minor as idolness.

And so, after an upwards of 80% attrition rate to early settlements, a survivor stock of American humans emerged and began to take hold of the land. These were tough fuckers. These people survived when 8 out of 10 people didn’t make the grade. And they started to do what all humans do given enough time. That is; pile up resources. The most savvy of the savvy snatched up land, the sterling tongues created the concept of property rights and started leveraging things called laws against the slower bunch.

The entrepreneurial men enslaved people from other continents to work their fields.

Slavery wasn’t just about controlling people who look different than you do because they look different than you do, it was a way to cut out the people who wanted a decent wage and Sundays off to go to church from the equation. Racists often like to assert that slave owners weren’t racist, they were just economical. Bullshit. They were fucking both. Just because there’s a cultural and economical rationale to slavery, doesn’t mean it isn’t deeply rooted in the oppression of fellow humans based on stark physiological (read:skin color) conditions.

Oh, and the other slap in face that makes me reject notions of racism in Isneberg’s work? Apparently the abolition of slavery itself had racist motivations. Ya, that is also something that is conveniently left out of the Alhambra School District history books from the mid 80’s to mid 90’s.

We’re all led to believe that, all of a sudden, a bunch of people in the North side of the country got woke and decided that owning the life of other human beings was existentially wrong. Ya, not so much. Because the consolidation of power had created an upper class of white people who were so upper class that they could own slaves to do all their manual labor for them, and since there was a hillbilly class of white people who managed to survive off handfuls of mud pies (called clay-eaters by the Antebellum snobs) and the occasional squirrel meat, some really fucking racist people started deciding that it would be better to free the slaves so that plantation owners would have to hire poor white people (because none of them would give money to a negro, naturally) to do the work they were previously getting for the price of keeping a group of owned people alive.

Damn. There goes the last shred of apparent decency I had about the founding of this country.

So Isenberg goes on in this way, providing the ultimate pessimistic view into the class-based history of America, which is fair, if ever I dealt in such a ridiculous concept as fairness, but what does it provide in terms of progress?

Well, since I am smart enough to draw my own conclusions without attempting to ascertain the intention of the author, I will simply write about what I took away from the book and that is this; if the impoverished people of our society, of all races, would band together and realize that poor white people have more in common with poor non-white people than they do with rich white people (something that fantastically escapes poor white people), then perhaps we would actually have a chance of making a dent in the perpetual problem of inequality in our American society.

“If you can convince the lowest white man he’s better than the best colored man, he won’t notice you’re picking his pocket. Hell, give him somebody to look down on, and he’ll empty his pockets for you.”

Read more books. I recommend this one. History is repeated by those who don’t know better.

“I love watching all the people anthropomorphize their dogs at the dog park. Everyone has a story, a voice they do, a dialogue they assign to their dogs. They project their own thoughts, aspirations, emotions, concerns off on to the fabricated personalities they’ve all assigned to what basically amounts to psychologically tortured canine slaves. They make claims about the inner thoughts of their dogs, remarking about how much little Scamp loves his treats and how Rascal over there has a thing for the ladies and blah blah blah blah blah, it’s all bullshit. Bullshit, bullshit bullshit bullshit. Quit projecting off on to your dogs. They basically have two thoughts, is it good or is it bad, that’s the complexity of that psyche,” said Chewy.

“Ya, I know what you mean,” I responded.

Prince laughed in the background and called us both a couple of nuts.